Nick Hanauer is a Seattle venture capitalist worth $1bn, and he’s been pissing off other one per-centers for some time, even writing articles like this one to warn his “fellow plutocrats” that if the minimum wage doesn’t rise to $15 soon, there will be a revolution in the States.

The super-rich banker also appeared on TED earlier this year to tell the world that rich people don’t create jobs, consumers do. Somebody wasn’t happy with Hanauer’s ideas, and TED banned the speech, stating his common-sense and socially conscious logic was “too politically controversial” for the site.

Hanauer’s only crime was to explain how the market works, pointing out that companies don’t actually like to employ people. Only consumer demand can force corporations to take on more staff, and clearly consumer demand is dependent on whether we have money in our pockets to spend. Hanaeur advocates the Middle-Out school of economics, rather than the dis-proven Top-Down myth we are used to. His argument is refreshingly simple.

Despite TED banning his speech, Hanauer isn’t deterred. Just this month he wrote another article, calling for Americans to contact the White House in support of his plan to save the middle classes. “The twisted irony is, when you work more hours for less pay, you hurt not only yourself, you hurt the real economy by depressing wages, increasing unemployment and reducing demand and innovation,” writes Hanaeur, although his motives are not entirely selfish: “Ironically, when you earn less, and unemployment is high, it even hurts capitalists like me.”

He then calls on readers to join the battle against America’s new poverty problem with a kind of humor reserved only for the super-rich: “Contact the White House. Do it for yourself. Or, at the very least, have the courtesy to do it for me. Because honestly, I’m beginning to run out of customers. In the meanwhile, I’ve got to go buy back more shares ahead of the next earnings report.”

Note 11th December 2014: Some readers have commented that this talk was not banned and is available on TED. Actually, the speech was banned from TED’s website (although it was later made available on Youtube). However, the ban caused a lot of controversy and in the wake of Nick’s popular article in Politico, which we linked to above in the text, TED realized Hanauer had a lot of public support and allowed him to make a second speech (here) in August. TED explained their U-turn in an article, which you can read here. 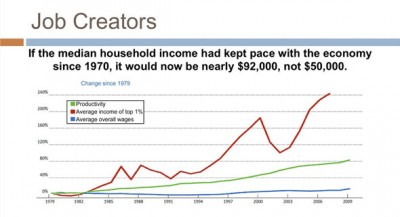